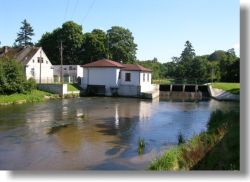 SMOŁDZINO - a commune village situated at the Gardneńska Lowland on the Łupawa River, at the foot of the Rowokół, a cult mountain of the Slovians.

The name may derive from the plant called "smłód" or from "smoła" - tar; Smolino (1281), Smoltzini (1288), Zmoizin (1282); German- Schmolsin.
The first notices on Smołdzino come from 1281. 10 years later, the duke Bogusław IV transferred the village to the monastery in Oliwa. In the years of 1329- 1341 the village belonged to the Teutonic Knights. Since 1622 the Smołdzino area had returned to the family of the Gryfits. The last duchess from the Gryfits family, Anna de Croy, spent in Smołdzino her last years. The duch-ess Anna was the founder of the church, in which a parson worked called Michał Mostnik (1583-1654), the author of both prayer-and-hymn books in the Slovinian language. Finally, after the termination of the Gryfits family, Smołdzino was transferred under the principality of Brandenburgia, and the Prussia. In the years of 1830-1838 there occurred a little war, peasants expelled the parson, refused to pay taxes onto the German school and even set a few fires - everything in the name of protection of the Polish speech. The last ser-mon in Polish was given in 1883. In Smołdzino in 1729 Johann Gotthelf Lind-ner was born, a professor of fine arts in Królewiec, and then a court preacher. 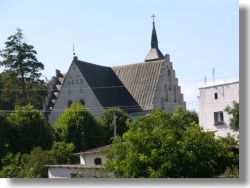 Monuments
The church of the XVII century (1632) in which there is placed the epitaph of the founder Anna Croy and her son Ernest Bogusław; in 1823 the church was enlarged and in 1874 a cross aisle was added. On the ceiling there are 49 pic-tures from the original ceiling, presumably the composition of the painter, Foxkirch, Gdańsk bell from 1706, 2 candlesticks, an altar and a baroque pulpit of XVII century. The tradition announces, that in the basements, there are bricked up the last Slovinian books sentenced for extermination in the mid of the previous century.
The court building of the XIX century, currently the post-office; after-court utility buildings from approx. 1880; a framework cottage, a twin made of clay; The Museum of Nature of the Slovinski National Park; The Rowokół Mountain; a munument in commemoration of the soldiers of the Soviet Army died in the fights for the village liberation; a hill stronghold (a few hundred meters outside the village) of an annular type with well preserved embank-ments and ditches situated on the south-east slope of the Rowokoł with which a version of a legend is connected, being repeated throughout the whole Kaszuby, about an outlandish castle and an enchanted princess, a stronghold must have been of a cult character; an oak - the monument of nature of the cir-cumference of 4,5 m in front of the head office of the SNP.

More information on the village and the commune can be obtained at the address: www.smoldzino.com.pl