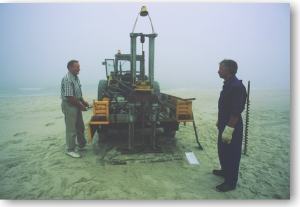 At the threshold of the third millennium, the attention of the scientific world is concentrated around the most precious natural objects - national parks. The existence of the areas only hardly contaminated by the civilisation with their variation of settlements is the chance of survival for many species, which numerical force has fallen drastically as a result of an excessive exploitation of natural resources.

The modern knowledge on the standing of natural environment of the Slovinski National Park is the aftermath of multidirectional scientific research - many expert appraisements, analyses, forecasts and diagnoses conducted with the use of modern measurement techniques. Relying on innovatory research programmes, there is possible, the implementation of more and more efficient methods of animated and inanimate nature protection, species and their natural settlements, biosensors and biotopes.

The knowledge of the history of nature transformations as well as complete inventory and valorization of natural resources of the Park constitute an indispensable basis to formulate the methods of practical protection of water, land-forest and non-forest ecosystems. The basis that enables effecting the projects of an active protection of the most endangered plants and animal species and their settlements in the Slovinski National Park. The knowledge that one receives throughout many-year scientific re-search is the key to success in the protection of the Baltic peat-bogs, in recreation of water and mud birds breeding settlements upon the Gardno Lake, natural refuge of sea mammals, restitution of powan (lavaret) in the Łebsko Lake, sea trout and salmon in the rivers of Łupawa and Łeba.

The results of the newest research constitute also priceless material for teachers who wish to effect the syllabus of biology teaching in the Slovinski National Park where preparations, books illustrations, films give the way to real plants, animals and eco-systems. A direct contact with nature, supported by the knowledge of the most recent scientific news, performs an immense role in sensitivity creation and the attitudes of future generations which very shortly will decide about the fate of the national, natural heritage.

We cordially invite to take the advantage of the honour, which undoubtedly is the possibility of deepening the secrets of nature in the Slovinski National Park - "The Sanctuary of Nature" of an international dignity.