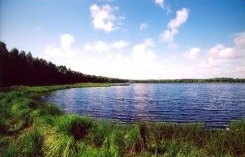 Inland waters occupy the area of 10 266,4 hectares, what constitutes 31,3% of the total Park area. The main water-bodies of the SNP are the lakes of the Łebsko and the Gardno, these are two largest in size Polish seaside reservoirs. Simultaneously, the Łebsko is the third largest lake in Poland and the Gardno classifies as the eighth one. The lakes are characterised by various hydrological rapports, formed as a result of the predominance of the land or sea factor. The Łupawa River bringing 7,6m3water/s escapes to the Gardno Lake, however the Łeba River introducing 11m3 water/s flows into the Łebsko Lake. Both lakes are connected with the sea with the aid of short mouth passages of these rivers. The lakes of Gardno and Łebsko are salt-water reservoirs. The periodical influx of sea waters to the lakes, throughout the river channels connecting them with the sea, makes the life conditions change for here-occurring organisms. Lakes salinity may then rate up to 3 promilles. It comes out from the carried research that the sea waters exert larger impact upon the Łebsko Lake than the Gardno Lake. Two smaller lakes of Dołgie Małe and Dołgie Duże do not possess the inflows. The outflow of these water regions follows to the Gardno-Łebsko channel. An inconsiderable depth of the lakes and large quantities of sediments carried by the rivers are the reason for proportionally rapid shallowing of lake basins, and as its aftermaths the overgrowing of more shallow water regions with the plants. This is the reason of constant area diminishing of the reservoirs of the SNP. 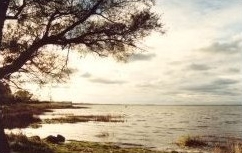 The lakes situated on the terrain of the Park, due to their natural features, are not resistant to inflowing pollution. It causes the intensity of eutrophication process developed by a permanent inflow of loads flowing down throughout the river-beds from the nearby fields and meadows or reaching the lakes together with precipitation. The main jeopardy for the Park's lakes water quality and fertility are phosphorus compounds as well as nitrogen compounds delivered and present in the water depths and bottom sediments. High concentrations of nitrogen and phosphorus compounds which have been registered for many years in the Park's waters are the main reason for water regions being largely trophic as well as progressive eutrophication of which a conspicuous indication is exuberant development of reeds, rushes and bulrushes flora.
The river network of northern declivity of Pomerania took the current form at the decline of Pleistocene and since then, it has been succumbing a permanent evolution. It demonstrates a clear connection with glacial sculpture of drained terrains. The main rivers flowing through the Park area, i.e. Łeba (basin area 1801,2 km2) and Łupawa (924,5 km2) commence at considerable altitudes: Łupawa - 202 m above the sea level, Łeba - 170 m above the sea level. Due to their short runs: Łupawa - 98,7km, Łeba - 118 km, they characterise with proportionally large middle-falls: Łupawa 2,040/00, Łeba 1,450/00. The rivers at their upper runs achieve particularly high falls. At the lower passages, the rivers are tortuous and indicate a slight decline of water-table.