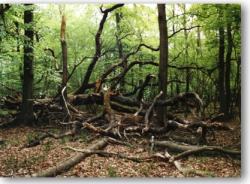 The strict protection relies on the utter and permanent relinquishment of human being interference in the state of ecosystems, creations and nature elements as well as in the course of natural processes in the areas of this protection category.
Within the borders of the Slovinski National Park, with the strict protection, there are comprised 12 areas with the elements of its peculiar flora and fauna, unique biocenosis or biotopes as well as landscape features. The Łebsko Spit constitutes the main protected object, which creates the complex of unique geomorphologic forms of beyond regional scale as well as the venue of natural rebuilding processes of the sea-side shore of a great dynamism. There occur here valuable woods assemblages, non-woods as well as water ecosystems. The total acreage of the protected areas numbers 5 928,93 hectares. Each of them has its proper name and determines the most significant protection object.

An active protection relies on performing the determined activities aiming towards the restoration of the natural state of ecosystems and nature elements or preservation of natural settlements as well as the settlements of plants, animals and mushrooms. An active protection shall be conducted everywhere where the natural regulatory processes were strongly disturbed and without the human being interference, it will be hard to achieve positive results. To gain the best protection results, one should at its maximum, choose the solutions which will concern the protection of the whole ecosystems. This is the best manner of protecting all environment components, while preserving proper interdependencies between their particular elements.
The total area of 14 701,83 hectares is comprised with active protection considering the SNP diversed ecosystems and their structures. They comprise the grounds of the State Treasury being under the auspices of the Park management as well as the grounds being managed by another party. On these areas the processes of natural environment restitution are initiated or supported in the direction of naturalising as well as sustaining the current state of investment. Within the content of an active protection, one can classify, first of all, the lakes: Łebsko and Gardno, Dołgie Duże, forest complexes outside the Spit (Rowokół) as well as non-forest assemblages situated in the south from the Park forest terrains.

The landscape protection services the role of preserving characteristic features of a given landscape. The areas of landscape protection on the terrain of the SNP (132,93 hectares) comprise the invested terrains including, among others, the settlements of Czołpino, the villages of Kluki and Gać as well as Rąbka settlement. The level of investment possible to be utilised here, shall be diversified according to the level of environment deformation, however, the main principal has been accepted, to support and properly direct the restoration processes. In this zone, tourist pedestrian traffic, bicycle traffic as well as using the water tracks must be exclusively conducted upon the determined tourist tracks, along with determining the places for rest and services at the defined points for this mobility.
The objects of animated and inanimate nature being naturally precious 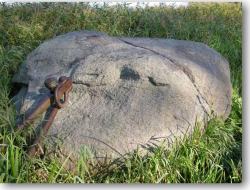 On the terrain of the Slovinski National Park (the SNP) there are situated exceptional objects, which deserve the status of the forms of individual protection, anyhow, they are comprised with the highest protection - compulsory in the national park. There belong the trees species of the monumental sizes as well as the trees and shrubs naturally precious. In total, in the SNP there have been proved 20 individuals of monumental trees including 10 oaks, 4 spruces, 5 ashes 1 European beech as well as 226pieces of the trees naturally precious, i.e.: 167 oaks 17 European beeches,10 spruces, 3 alders, 8 ashes, 2 maples, 1 linden, 3 hornbeams, 2 firs, 1larch, 1 rowan, 2 bird cherries as well as 4 individuals of juniper. Apart from the above mentioned animated elements of nature, the element of inanimate nature also deserves protection and care, situated in the village of Gardna Wielka, at the bank of the Gardno lake. It is an erratic boulder, called in the past "the devil's stone" by the local inhabitants. Plants and animals comprised with the species protection 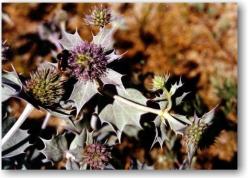 Among the representatives of plants world of the Slovinski National Park (the SNP) there proved, in total 161 species comprised with strict protection as well as 44 species comprised with partial protection. The majority of strictly protected species (77) constitute the vascular plants, the others are lichens (48) and Bryophytas (36) . Among the species partially protected 15 of them belong to vascular plants, 20 to Bryophytas, and 9 to lichens. On the terrain of the Park there have also been proved 52 species deserving the local protection. From the total number of vascular species comprised with strict protection, as many as 18 are registered in PCKR*, 17 of them are classified in the category of high-risk species, however 3 are critically endangered in Poland i.e.: slender cotton-grass Eriophorum gracile - grows in well-watered transitional peatbog, yellow azalea Rhododendron luteum, which is not a natural species in the SNP and dwarf marsh violetViola epipsila growing in riparian forests, alder swamps and unforested lowland peat-bogs. The consecutive 6 species belong to the ones endangered in Poland: tufted Alpine bulrush Baeothryon cespitosum, water lobelia Lobelia dortmanna, floating water plantain Luronium natans, brown beak-sedge Rhynchospora fusca, cloudberry Rubus chamaemorus and Swedish whitebeam Sorbus intermedia. The other 8 are the subject to extinction in Poland, e.g.: silver fir Abies alba, English yew Taxus baccata, lake quill-wort Isoetes lacustris, white water-lily flowerNymphaea candida, maritime plantain Plantago maritima, or toad-flax Linaria odora.
The representatives of sarthropods being under strict protection, including the insects Insecta, which make the highest number, constitute the most numerous animal group in the Slovinski National Park (the SNP). There have been observed here some 30protected species from which the majority belong to the order of cockchafer Coleoptera. Among all protected insects as-certained on the terrain of the Park 4 species are registered in PCKZ*. There also occur 2 species of wood ants from the genus ofFormica i.e.: southern wood ant Formica rufa and red wood ant Formica polyctena - comprised with partial protection. Among the invertebrates, one can often observe in the Park, a spider (comprised with utter protection) from the family of cross spidersAraneidae - wasp spider Agriope bruennichi, however, on the seaside beach, under the stones in the zone of a tide rip, there lives the representative of another phylum of invertebrates - small-sized crustacean - amphipod crustacean Talitrus saltator. The fauna of molluscs of the SNP has been acquainted only partially. In total, there have been ascertained here 9 molluscs' species comprised with strict protection as well as the largest, European snail - edible snail Helix pomatia, comprised with partial protection. The mostly studied animal group are vertebrates, and among them there have been ascertained 4 protectedfresh-water fish species as well as 3 lamprey species, 10 representatives of amphibian phylum, 5 reptile species, the most numerous vertebrate group in the Park comprised with protection - 225 strict and 8 partially protected representatives of birdsfauna and 11 species being comprised with strict protection and 6 species being within partial protection, representing the phylum of mammals. * PCKR/PCKZ - Polish Red Book of Plants/Polish Red Book of Animals